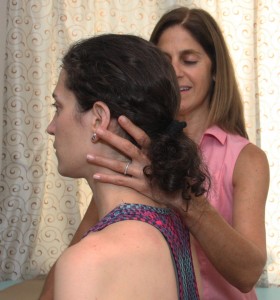 develop at an early age and are reinforced over a lifetime. We move around all day without thinking about the body, straining our muscles unnecessarily. Our bodies are a low priority until something breaks down and draws our attention.  The Alexander Technique is like an owner’s manual for the body; it teaches  you to use the body correctly.  You learn to notice and change poor postural habits and to restore coordination and poise.  It relieves pain, frees breathing, improves performance in artists and athletes, and promotes inner calm.  The Technique also gives you tools to stop acting without thinking and to instead respond with greater mental clarity.

The Alexander Technique can be helpful to those with chronic pain including back pain, repetitive strain injuries, and TMJ, and to many performing artists such as musicians, singers and actors as well as those who want to improve their sense of self and personal development.

F.M. Alexander was an actor who developed chronic laryngitis when he performed. He discovered that excess tension throughout his body was the cause of his problem and discovered a method to speak and move with greater ease.  When he began training teachers in England in the fifties, the Alexander Technique became more widely disseminated and is now taught throughout the world by thousands of practitioners and in major institutions of higher learning.

Elizabeth Buonomo has been teaching the Alexander Technique since 1993 when she completed a three-year teacher certification program at the American Center for the Alexander Technique in New York City. She currently maintains a private practice in Bergen County, New Jersey. Elizabeth has taught extensively in Austria, as well as in Japan and Switzerland. For decades, she has studied the movement arts and mindfulness practices. Elizabeth is a member of the American Society for the Alexander Technique (AmSAT). AmSAT certified teachers are highly trained professionals who have completed a 1600-hour training program over a period of three years.
Learn more about Elizabeth. 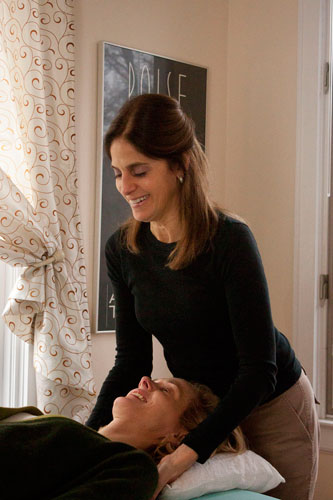 I offer a free phone consultation. If you are experiencing pain, stress, a postural or movement problem I’d be glad to evaluate if and how I can help you. Please call me at (201)750-2979 or fill out the form below to arrange your consultation.